IL DIVO’s latest album “A MUSICAL AFFAIR” (2013 ) is their first album covering famous musical tunes, and was released first in Japan, before the rest of the world.

The cafes are serving special menus inspired by the cuisine’s of the guys’ four home countries and the title of their songs.

The cafes will be open until March 12 in Tokyo and Osaka in the following locations. 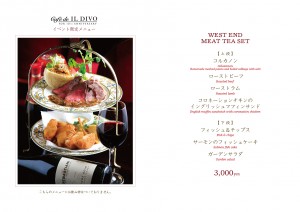